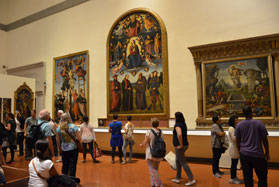 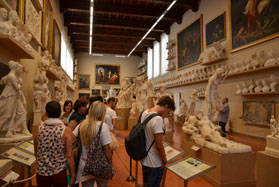 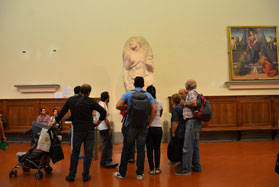 A bit of history about the Accademia Gallery

The Accademia Gallery occupies some rooms from the XIV century, which belonged to the old hospital of San Mateo as well as to the old monastery of San Nicolás de Cafaggio. Subsequently the Grand Duke Leopold of Lorraine founded the Academy of Fine Arts with a collection for the students. At the end of the 18th century these rooms were completely restructured to house the famous museum dedicated to Michelangelo.

This is a must stop for anyone visiting Florence since it houses the "David" of Michelangelo sculpted between 1501-1504 to be an outside decoration of the Cathedral of Florence, it became instead a symbol of the Florentine State commitment to freedom and independence, as well as a symbol of the Medici's defeat in 1494. It still personifies energy, vigor and courage, symbolizing the whole mankind fight for survival. His anatomy, later reproduced by Michelangelos contemporaries, was carefully depicted, thanks to the in-depth studies carried out by the great artist.

What is the Accademia Gallery nowadays?

Nowadays, the Accademia Gallery houses not only the David, there are four statues of the Slaves commissioned by pope Julius II as a decoration of his grave, these statues are known as The Prisoners. Also exposed the Mourning over Jesus Christ and St. Matthew. The museum houses an interesting collection of paintings from the Middle Ages, Renaissance and the early 17th century.

The original collection was extended over the years thanks to the artworks coming from the suppression of some of the religious orders and with that the closing of churches and monasteries. The Gallery also has a room dedicated to antique musical instruments that once belonged to the Medici and Lorraine families.

Curiosities about the Accademia Gallery

David is considered the masterpiece of Michelangelo but as all brilliance hides history, anecdotes, and legends.

Did you know that the block of marble that was used to create the David was extracted from the quarry of Fantiscistti in Carrara and then it was transported to Florence? This block has pass by many hands before arriving to Michelangelos hand, it was 5.50 meters high and was called the giant. The artist Simone da Fiesole had damage it trying to sculpt and then it was abandoned for many years, later on others artists tried to sculpt it without success.

Why visit the Accademia Gallery?

The Accademia Gallery as well as the Uffizi Gallery, is one of the most visited museums of Florence and the world. The most interesting work and the ones that make the Gallery internationally recognized are without question the work created by Michelangelo, being the most important the statue of David.

Here we can appreciate not only the David, but another 6 extraordinary works from this brilliant artist, like the four Prisoners or slaves that are 4 different sculptures that represent male figures semi sculpted, this is, not completely finished that give the impression of being trapped in the block of marble looking for a way to get out of the stone. They are located in the Gallery of the Prisoners of the Accademia Gallery forming an entrance hallway to get to the David.

How to visit the Accademia Gallery?

This museum attracts thousands of tourists from all over the world every year, so, we recommend you to buy the ticket to the Accademia Gallery in advance, booking in this way the entry time. In some specific day of the week, at a fixed time, it is possible to take part to the Accademia Gallery group tour. This guided tour can be combined with other tours such as a panoramic tour of the city by bus, to a city walking tour or a tour of the Uffizi Gallery.

If instead you prefer to deepen the visit following the explanations of an expert in the day and at the time you prefer, we suggest you to book the visit to the Accademia Gallery with a private guide. The itineraries of the private tours can change according to your interests: if you are a fan of the great Michelangelo, we suggest to include a visit to Casa Buonarroti during your private visit to the Accademia Gallery; if on the contrary you wish to immerse yourself in art, we advise you to spend a full day discovering Florence visiting the Accademia Gallery, the Uffizi Gallery and the historic center of the city.

Florence has many corners to explore and many places to enjoy. A few steps away from the Accademia Gallery you will find many others attractions that you cant miss like the Piazza del Duomo, the center of the religious power of the city with the majestic Santa Maria del Fiore more known like Florences Cathedral, that looks impressive with the bell tower of Giotto and the striking dome of Brunelleschi. We cant leave aside the Battistero, characterized by the white and green marble facing with origins from the XI and XII centuries. 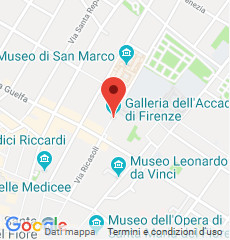