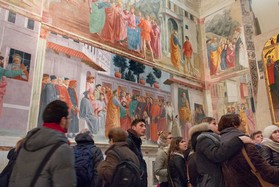 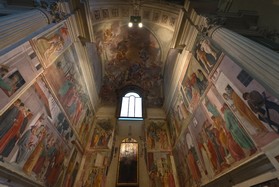 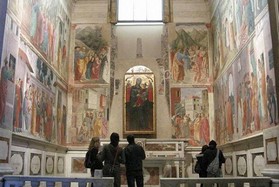 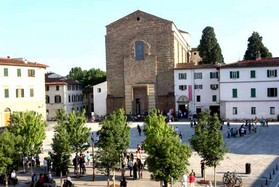 A bit of history of the Brancacci Chapelr

Born as a tribute to the Virgin of Carmel, the Church of Santa Maria was built in 1268 as part of a Carmelite nunnery and enlarged in the following centuries. In the second half of the 18th century, the Church was almost entirely destroyed by fire, which fortunately spared the so-called Brancacci Chapel.

The Brancacci was an ancient Florentine family, and at the end of the 14th century, they bought a family chapel in the Church of Santa Maria del Carmine. However, it was not until the early 15th century that the decoration of the chapel began. The decoration work was entrusted to Masolino's workshop, to which the famous Renaissance painter Masaccio also belonged. The two of them divided the tasks and began to fresco the chapel with the theme of the Stories of St. Peter.

The work, however, had to be interrupted by the exile of the Brancacci family, who had become Cosimo de' Medici's enemy. The exile lasted until 1480. After their name was rehabilitated, the family returned in possession of their properties, including the chapel. Work continued on the chapel, which was then entrusted to Filippino Lippi, another great Renaissance painter and pupil of the famous Sandro Botticelli.

During the 16th century, the Brancacci family decayed, but nobody wanted to take over the chapel. After some restorations and modifications, there was the fire of 1771, which caused severe damage to the whole structure. The chapel was then restored again together with the Church and only in 1780, with the renunciation of the Brancacci family (who had fled to France under the new name De Brancas), was it acquired by the Riccardi, another very ancient Florentine family with German origins.

What is the Brancacci Chapel today?

The Chapel is a "miniature" museum that contains some of the most important choral works of the Florentine Renaissance in a small space. You can access it through an entrance on the right of the central entrance of the church. From here, you can enter the building, walk down the single nave and then stop on the right side of the transept, where you will find the Chapel in all its beauty. On the opposite side, you can also admire the Corsini Chapel. From the same entrance on the right is the Carmelite convent.

Curiosities about the Brancacci Chapel

The fire of 1771 also partially damaged the Brancacci Chapel, but the extent of the damage was not immediately apparent. Only later, it was discovered that the heat of the fire had saturated the colours of the frescoes, making them opaque and dull. In fact, during the first restoration of the Chapel, it was thought that these were the real colours used by the three painters. Masaccio's choice of colours was therefore criticised, even though they continued to appreciate the artist's talent, while the work of Masolino and Filippino Lippi was considered mediocre. However, in 1932 the art historian Ugo Procacci encountered a part of a fresco hidden under two marble slabs of the altar and in that case the colours were bright and vivid.
From this discovery, it was clear that probably also the other frescoes had to have the same colouring initially and so a deep restoration work was initiated that brought to light the true colours of the Chapel.

Did you know that some paintings in the Chapel have been censored? During the government of Cosimo III de' Medici (1670-1723), famous for being a very conservative Catholic, the figures of Adam and Eve portrayed during the expulsion from Eden were covered with painted ivy on the parts representing the genitals. This covering was, however, removed during the restoration in 1990, which returned the painting to its original nudity.

Why visit the Brancacci Chapel?

The Brancacci Chapel is an unmissable opportunity to observe a piece of Florentine Renaissance painting history in a single moment. The styles of Masolino, Masaccio and Filippino Lippi alternate, creating an artistic timeline that shows the development of painting over almost a century. Unique in its kind, the Chapel opens like a small jewel hidden in a church with a straightforward and rustic exterior, set in the deepest Oltrarno, far from the splendour and elegance of the city centre and perhaps even more precious for this reason.

How can I visit the Brancacci Chapel?

The reservation of the Brancacci Chapel is required, and the entrance is a priority, it can be visited on Friday by buying the ticket in combination with the Audio Guide of the city of Florence. Alternatively, you can visit on Saturday, Sunday and Monday by purchasing a combined ticket which includes the Brancacci Chapel and the Church of Santa Maria del Carmine with an increase in the base price. Also, with the second option, the ticket is combined with the Florence Audio Guide, which will allow you to absorb all the splendour of the Renaissance.

If you want to see other important religious sites in the city of Florence, you can't miss visiting the beautiful Duomo Complex and especially the famous Brunelleschi Dome. You can also visit the Church of Santa Maria Novella with its old Pharmacy, or the Basilica of Santa Croce, a real Florentine pantheon.

Suppose art and civil architecture are things that interest you. In that case, you cannot miss the visits to Palazzo Vecchio, Palazzo Pitti, the Uffizi Gallery and the Accademia Gallery, which houses Michelangelo's famous David.

if, on the other hand, you want to see new landscapes, you can leave the city and reach the nearby city of Pisa, known all over the world for its characteristic Leaning Tower. Or you can choose a more medieval city like San Gimignano, which high towers welcome visitors today as they did many centuries ago. 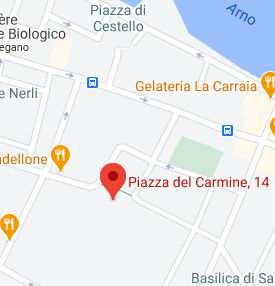