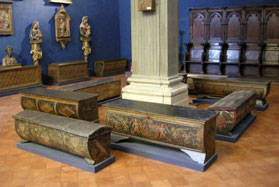 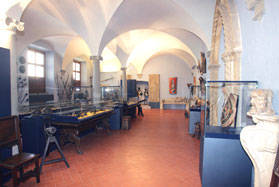 A little history of the Bardini Museum

Stefano Bardini built in 1880 the building that houses the museum that currently bears his name. Bardini bought a complex of buildings of the period, including the sanctuary church of San Gregorio della Pace, built between 1273 and 1279, which was sold and transformed years later into an imposing eclectic building using scrap materials such as medieval and Renaissance stones, carved architraves, fireplaces and staircases, as well as painted coffered ceilings. For example, the windows of the first floor of the facade, come from the altars of a church demolished in Pistoia, San Lorenzo.

The Bardini property complex featured buildings such as the 13th century Palazzo Mozzi overlooking the square and the historic park with four hectares on the slopes of the Belvedere hill which today is known as the Bardini Garden and has a magnificent view. Inside was a villa, now Villa Bardini with a panoramic loggia, laboratories, service rooms, showrooms and storage facilities.

With the death of Bardini in 1922, this neo-Renaissance building and its collections were inherited by the city of Florence, creating the civic museum of the city. It was closed for restoration for almost a decade from 1999 to 2009.

What is the Bardini Museum nowadays?

Currently the museum houses an eclectic collection of more than 3600 works, including paintings, sculptures, armor, musical instruments, ceramics, coins, medals and antique furniture. Among the most important works are the "Carità" (in English Charity) by Tino di Camaino, the "Madonna dei Cordai" by Donatello and a "Madonna col Bambino" attributed to the same Donatello, terracotta glazed from the workshop of Della Robbia, "Saint Michael Archangel" by Antonio of the Pollaiolo, "Martirio di una santa" by Tintoretto, a work by Guercino and thirty drawings by Tiepolo.

Curiosities of the Bardini Museum

Did you know that the Bronze Boar Fountain known as the "Porcellino" was made by Pietro Tacca, disciple of Giambologna, in 1612 and is in the Bardini Museum? A copy of this work, which most of Florence's visitors know, is under the loggia of the Mercato Nuovo (New Market) near the Palazzo Vecchio. Tourists who visit the city have always had the habit of touching the snout of the boar as it is said that it brings good luck. It is possible to see other copies of this work around the world in countries like Australia, Canada, Denmark, France, Germany, Great Britain, and The United States.

Why visit the Bardini Museum?

The Bardini Museum constitutes the testamentary legacy of the antiquarian Stefano Bardini to the city of Florence. The long and accurate restoration work of the Bardini Museum attempted to restore the configuration that the antiquarian Stefano Bardini had originally given to the exhibition. Stefano Bardini was formed as a painter and became famous as a restaurateur, in addition, he organized a collection of works of art for love and passion to the Renaissance. Thanks to him, the interest in Renaissance architectural decorations, stucco sculptures and terracotta sculptures was rediscovered.

How to visit the Bardini Museum?

Stefano Bardini has been a very important figure in the artistic field, so we recommend that you trust a guide to better appreciate the history of this famous antique dealer. One of the most interesting itineraries includes a visit to the Bardini Museum and to Casa Siviero (the 007 of art) to which is also possible to add a visit to the Uffizi Gallery.

Florence is one of the most beautiful cities in Italy and the world, it is also known as the birthplace of the Italian Renaissance. Florence is an open sky museum with a number of attractions to visit. During your visit you can not stop to see the following attractions:

The Campanile di Giotto that after having climbed its 414 steps you can enjoy the views of the city from above. The Campanile di Giotto is located in the Duomo complex of Florence, winged from the Cathedral of Santa Maria del Fiore, built by the best architects of the time such as Giotto, Brunelleschi, Vasari, Lorenzo Ghiberti and others. You can also climb the 436 steps of the famous Brunelleschi's dome, just a unique experience. In this same complex is the Battistero di San Giovanni (Baptistery of St. John) where you can see the copy of the door of Paradise as the original work is located in the Museo dell'Opera del Duomo (Opera Duomo Museum) in the back of the Duomo of Florence.

On your way through the city, cross the Ponte Vecchio with its gold and silver shops while enjoying the view of the Arno River. Note that on the Ponte Vecchio there are a number of windows, just above the jewellery shops of the bridge, this passage is the famous Vasari Corridor that connects Palazzo Vecchio with the Pitti Palace. Currently the entrance to the Vasari Corridor originates in the wonderful Uffizi Gallery, one of the most beautiful art museums in the world and probably the most complete in terms of Renaissance works, here we find works by Michelangelo, Giotto, Leonardo da Vinci, Botticelli and Raphael. 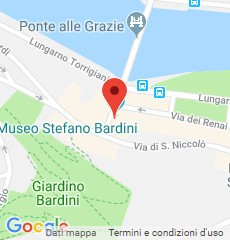