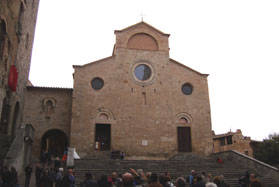 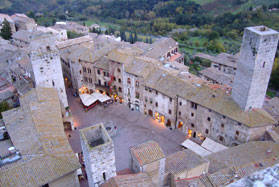 A little history of San Gimignano

The Etruscans founded San Gimignano in the 3rd century BC in the medieval via Francigena, however much of the historical documents found begin in the 10th century, when it takes its name from the Bishop Saint Geminiano who defended it from the Huns of Attila. During the Middle Ages and the Renaissance was a point where the Catholic pilgrims on their way to Rome would stop. San Gimignano was developed by the trade of its agricultural products.

In 1199 this small town lived its period of greater splendor, it became independent of the bishops of Volterra and despite the divisions between Guelphs and Ghibellines it was embellished with works of art and Architectonics.

Dante Alighieri stayed in San Gimignano as ambassador of the Guelfa League in Tuscany since May 8, 1300. The city flourished until 1348, when it was forced to submit to Florence when it was affected by the Black Death or Black Plague that affected whole Europe. San Gimignano became a secondary center until the 19th century, when its category as a tourist and artistic center began to be recognized.

What is San Gimignano today?

San Gimignano is a small town that has little more than 7000 people and still retains its medieval walls, it is about 40 minutes from Siena and Florence. San Gimignano is one of the many points of interest in Tuscany. Its impressive medieval architecture has made this town known all over the world thanks to its towers. The Historic centre of San Gimignano was declared in 1990, World Heritage Site by UNESCO.

Did you know that many have called San Gimignano "the Manhattan of the Middle Ages?" San Gimignano is a citadel of medieval skyscrapers perfectly conserved with 13 towers, although they were originally built between 70 and 74 towers that pitifully with wars and other catastrophes were destroyed.

Did you know that the tower was a symbol of power? The most important families competed with each other to build the tallest tower. Whoever had more power and wealth continued to add floors to the towers, so everyone could see in the hands of who was the power.

Simply because it is a beautiful village with its stone towers several centuries ago that rise to the sky in the middle of a labyrinth of medieval alleys where we can admire its monumental gates, churches, souvenirs and gastronomy shops and restaurants. It also has spectacular panoramic observation points from where we can see the valleys and the mountains that surround it.

How to visit San Gimignano?

If you are in Florence and you want to spend a day exploring the villages of Tuscany, you can book a visit to Siena, San Gimignano, Monteriggioni and Chianti with transfer including departure and return to / from Florence.

Other attractions of Tuscany

Without a doubt, Tuscany is one of the undisputed protagonists in the world tourist panorama. Here you can visit cities of great artistic and cultural interest and importance such as:

Siena is one of the most beautiful medieval cities in Italy located in the heart of Tuscany and surrounded by hills. Here you can visit the famous Piazza del Campo where the famous Palio (Horse race) is celebrated, one of the most important events for those who live in Siena. Some of the attractions you will find in Siena are: Piazza del Campo with the Palazzo Pubblico and the Torre of Mangia and of course, you can not miss a visit to the Duomo of Siena with its black and white marble, the baptistery and much more.

Arezzo has a lot to offer to its visitors, the center of Arezzo retains splendid monuments, churches, palaces and museums. The Basilica di San Francesco is possibly the most famous church in the city as it houses the cycle of frescoes of the "Leggenda della Vera Croce" (The history of the true cross) by Piero della Francesca, a Renaissance masterpiece of inestimable value. Also in Arezzo is the Fortezza Medicea, the Roman amphitheater and the Church of San Francesco with the "Crocifisso Ligneo" of Cimabue.

But not only the city has artistic and architectural attractions, but also other cities and towns in the province such as Cortona, Anghiari, San Sepolcro, Poppi, these are just some of the most beautiful places in the province of Arezzo that deserve to be visited.

What to see in San Gimignano

The Cathedral: it houses masterpieces of Benozzo Gozzoli and Taddeo di Bartolo.

The Civic Museum: located in the Palazzo del Popolo, it houses works by Pinturicchio, Benozzo Gozzoli and Filippino Lippi.

The Museum of Torture: divided into two locations, one shows the various instruments of torture used during the centuries and the other one is dedicated to the death penalty. 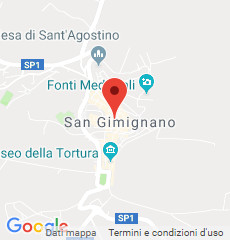