Tickets valid also for the Palatine Gallery, the Costume Gallery and the Medici Treasures

A bit of history about the Modern Art Gallery

This collection began with the collection of the best works of the competitions made by the Academy of Arts and Design and which were initially exhibited in the Accademia Gallery. Over the years, this collection was enriched with the artworks of numerous city dwellers of the time such as Diego Martelli, acquired in 1897.

The current exhibition was organized between 1972 and 1979 even though it opened its doors to the public in 1924. The restoration of the corridors was carried out in 2005.

What is the Modern Art Gallery nowadays?

The collection includes masterpieces by Macchiaioli. Also we find works of Giovanni Fattori, Silvestro Lega, Telemaco Signorini and Michele Gordigiani. The favorite subjects of this artistic, anti-academic movement were battlefields with wounded soldiers, the Tuscan coast in the area of Castiglioncello, elegant ladies sitting in cafes or on the piano or while walking with friends or girls such as Alaide Banti in the famous portrait of Boldini. The "macchiaiolo" style can somehow be compared to the impressionist, as he created his own personal and intense way of painting.

Curiosities about the Modern Art Gallery

Did you know that the main purpose of the creation of this gallery was to help and educate the students of the Academy of Fine Arts in the new fields of the era as international neoclassicism?

Did you know that between 2013 and 2014, the Modern Art Gallery of the Pitti Palace exhibited 12 works of the Impressionist period of the Orsay Museum of Paris, exposing them during the winter quarter in the ballroom?

Why visit the Modern Art Gallery?

The Modern Art Gallery contains works of art such as paintings and sculptures related mainly to the figurative culture of Tuscany ranging from the late eighteenth century to the period between the two world wars.

The importance of this museum lies in the illustration of the evolution of Tuscan art in its neo-classical, romantic and purist periods that focused on themes such as the historic celebration of anti-academic reform made after the first half of the century By the group of "macchiaioli" and based on a painting made by splashes or spots of color with contrasts of light whose predominant theme was nature and everyday life.

How to visit the Modern Art Gallery?

The Pitti Palace contains several museums inside, some of which are included in the entrance ticket of the Modern Art Gallery such as the Palatine Gallery, the Treasure of the Grand Dukes and the Museum of Fashion and Costumes.

The Modern Art Gallery is located in the neighborhood of Oltrarno inside the majestic Pitti Palace. This is an integral neighborhood of the historical center of Florence that includes the districts of Santo Spirito and San Frediano. This area of the city has countless monuments, gardens, museums and unique monumental palaces in the world, among the most well-known are the Pitti Palace which houses several museums, the Basilica of Santo Spirito, the Bardini Garden, the Boboli Gardens, the Ponte Vecchio without neglecting the businesses and shops of artisans, goldsmiths and restaurateurs who still live and give life to the Florence of the past. 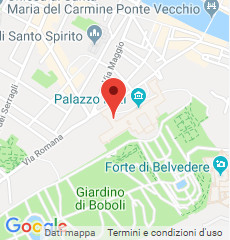