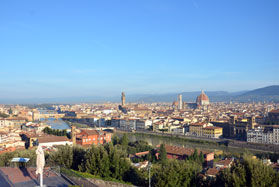 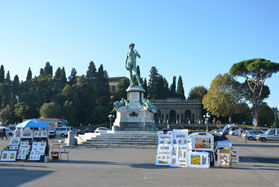 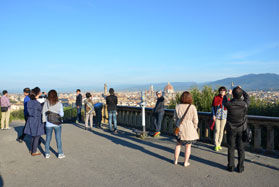 A little history of Piazzale Michelangelo

The Piazzale Michelangelo was built on the hills located south of the Florence's historic center following the design of the architect Giuseppe Poggi. In 1869 Florence was the capital of Italy in this period, the whole city underwent an intense urban renewal, the "lungarni" (riverside walkways following the Arno) were created; on the right side replacing the walls of the 14th century the bypass (Viali di Circonvallazione) was opened and to the left side a panoramic tree-lined street of 8 km, currently called Viale dei Colli, in which top was constructed the Piazzale Michelangelo, as a panoramic terrace on the city. From 1890 to 1935, this street was used by the tram tracks of the Chianti that connected Florence with Greve in Chianti and San Casciano Val di Pesa.

In 1873 a copy of Michelangelo's David was taken to the square with the help of nine pairs of oxen. This monument occupies a privileged position, observing the city from above as a guard attentive to all the beauties that the city of Florence offers. This square was dedicated to the great Renaissance artist Michelangelo and the copy of the David was located in the center of the square next to the four allegories of the Medici Chapels of San Lorenzo. Poggi also designed the lodge in neoclassical style as a museum for the works of Michelangelo, but this museum was never built and currently houses a panoramic restaurant.

How to get to Piazzale Michelangelo?

The Piazzale Michelangelo offers a beautiful panoramic view of Florence and the Arno, and is definitely a must stop for tourists and Florentines. The Piazzale Michelangelo welcomes an endless number of tourists every year, where banquets and presentations are also held. Part of the Piazzale is a parking lot so if you arrive by car you can park without any problems. It is also possible to reach the Piazzale Michelangelo by taking the bus number 12 or 13 from the city center or also with the tourist buses that run some streets of the historical center of Florence. The third option and the most recommended is to walk since at every step you can discover something more of this city cradle of renaissance.

Seeing how the sun falls from the Piazzale Michelangelo (Square of Michelangelo) over the city of Florence and over the Arno River, is one of the most beautiful and spectacular photographs that will remain imprinted in your mind for a lifetime.

Did you know that on the wall just below the neoclassical lodge that Poggi designed, you will find an inscription that commemorate his work? This inscription reads: "Giuseppe Poggi architetto fiorentino volgetevi ecco il suo monument MCMXI" (Giuseppe Poggi, Florentine architect, turn around, here is his monument MCMXI).

Why visit the Piazzale Michelangelo?

Michelangelos square or better known in Italian as Piazzale Michelangelo is one of the best viewpoints in Florence, it is the most famous observation point to appreciate the panorama of the city in all its splendor besides being an attraction that no tourist can miss on their visit to Florence. In the center of this square you can enjoy one of three copies of Michelangelo's David, this copy was made in bronze.

A very special way to visit this unforgettable place is undoubtedly the visit it on foot, starting at the Ponte Vecchio with a private guide who will guide you step by step up to the Piazzale Michelangelo.

At the foot of the Piazzale Michelangelo, the Bardini Museum is an interesting museum with great ceramics of Della Robbia, Greek and Roman artifacts and some works by Donatello. This museum is located in an elegant building renovated by Stefano Bardini at the end of the 18th century.

On a short distance from the Bardini Museum is also Casa Buonarroti (House Buonarroti). Although Michelangelo was not born in Florence, but in Caprese, in the province of Arezzo, his family built this house years later, a place to celebrate the memory of the genius Michelangelo. Later it became a museum. This museum dedicated to Michelangelo is located in the palace of the Buonarroti family, on the corner of Via Ghibellina and Via Buonarroti.

From the Piazzale Michelangelo the first thing we can see is the immense and magnificent Brunelleschi dome that forms the cover of the Florence Duomo. It was conceived, designed, and built by Filippo Brunelleschi who began its construction during the Italian Renaissance.

Not to be missed:

From the Piazzale Michelangelo you can get to the wonderful Basilica of San Miniato al Monte on foot. 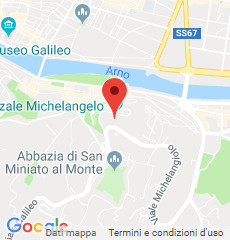