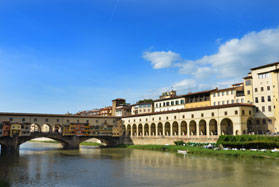 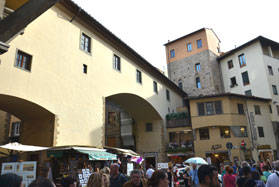 A little history of the Vasari Corridor

The construction of the Vasari Corridor was commissioned to Giorgio Vasari by the Grand Duke Cosimo I in 1565. This construction was carried out in only five months, giving the members of the Medici family the possibility of moving freely through the city center, in a period in which they did not count with the support of the population to one hundred percent.

This famous elevated corridor joins Palazzo Vecchio with the Pitti Palace, two buildings of power in Florence. Palazzo Vecchio is located in Piazza della Signoria (square), the seat of the city's political power, while the Pitti Palace was the residence of the Medici family. The famous architect Vasari was also the author of the project of the Uffizi Gallery and made this passage that connects the two banks of the Arno river crossing over the Ponte Vecchio (Old Bridge).

With the bombings of World War II, the Nazis blew up all the bridges except Ponte Vecchio, and the Vasari Corridor was the only possibility to cross the city from north to south even though it suffered several damages.

What is the Vasari Corridor nowadays?

The Vasari Corridor or Vasarian Corridor is a one kilometer-long structure, created for practical reasons with the purpose of linking the offices of the Medici with the current Uffizi Gallery and the the Pitti Palace which was the residence of the family. In this true architectural innovation began to take shape the oldest collection of self-portraits from the 16th century to the 20th century, as well as a collection of paintings dating from the 17th to the 18th century and where important episodes of the history of Florence are told.

At the moment this narrow Corridor begins in the second corridor of the Uffizi Gallery and extends along the Arno river, over the Ponte Vecchio, crossing the church of Saint Felicity (chiesa di Santa Felicita) until arriving to the Oitti Palace. The route of the Vasari Corridor ends in the Boboli Gardens, next to the Grotto of Buontalenti.

Curiosities of the Vasari Corridor

Did you know that on the Ponte Vecchio before the jewelers was the meat market in Florence? Legend has it that the Medici family did not consider that to cross this area with bad smells was a thing worthy of the nobility, therefore expelled the butchers and exhorted the goldsmiths to occupy the bridge with the jewelers, a trade, according to them, more suitable.

Why visit the Vasari Corridor?

The Vasari Corridor offers a visit to discover the history of the passage and the city. One of the things that impresses most of the Vasari Corridor is its elevated and privileged position that offers the possibility to cross some of the most beautiful places of the historical center of Florence walking practically over the heads of the pedestrians.

Looking through the small windows of the Corridor gives the feeling of "spying" on people walking down the street. Probably the reason for its construction was to walk in absolute discretion and security, watching what happened outside without being noticed.

How to visit the Vasari Corridor?

Currently the Vasari Corridor is closed to the public.

Whose ever has been in the cradle of the Renaissance knows that some of the obligatory visits are:

The Uffizi Gallery is a complex that houses works of art from great artists such as Botticelli, Giotto, Cimabue, Michelangelo, Leonardo da Vinci and Raphael as well as works by other artists from the 12th to 17th centuries.

The Accademia Gallery is a gallery of international fame for the works exhibited in its interior, several of them works of Michelangelo, being the most spectacular, the statue of the David. You can combine this visit with the Bargello Museum where exhibitions of Michelangelo's early sculptures are exhibited, among others.

The Ponte Vecchio is one of the symbols of Florence being the oldest bridge in Florence that crosses the Arno River in its narrowest part.

The Boboli Gardens are the largest green area of Florence where we can find caves, fountains, pergolas, marble statues and a small lake among many other things.

The Vasari Corridor is currently closed to visitors for maintenance work. 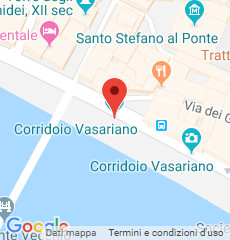