Tickets valid also for the Modern Art Gallery, The Costume Gallery and The Medici Treasures

A bit of history about the Palatine Gallery

The construction of the building that houses the Palatine Gallery was ordered by the Florentine banker Lucca Pitti. This striking structure dominate the neighborhood called Oltrarno that means to the other side of the river Arno and its design is attributed to Filippo Brunelleschi. The construction of this majestic building was extended during four centuries, starting from the central body built originally with seven windows distributed in two floors. This building has become the real palace of three dynasties: the Medici, the Lorraine and the Savoia.

A the beginning of XIX the Grand Lorraine Duchess organized the collection of paintings collected throughout previous centuries by the Medici family and increased it with their own heritage and acquisitions. The museum opened its doors to the public in 1828.

The most important part of the collection kept in the interior of the Palatine Gallery is distributed in 6 rooms that form the facade of the Pitti Palace and in the north part, considered the winter apartment of the Medici dukes. Considering the grandeur of the palace, this rooms were abandoned and were used to carry out expositions since the late XVII century with the most important paintings accumulated to the date, its approximately calculated 500 works for the most part coming from the collection of the Medici family.

What is the Palatine Gallery nowadays?

Today, this glamorous painting gallery is housed in the last residence of the Medici. Later it became the residence of the Habsburg-Lorraine family and of the Royal family of Italy when Florence was the capital of the country.

Among the artworks here are many by Raffaello, Tiziano, Andrea del Sarto, Rubens, Van Dyke and Caravaggio, purchased by the Medici or donated to them. Most of them belonged to the collections of Cardinal Leopold and Prince Ferdinand. As in the Uffizi, the collection is fully international, with a high number of Dutch and Flemish paintings. From the Gallery of the Statues a balcony opens up on the courtyard and offers a splendid view onto the Boboli Gardens.

Curiosities about the Palatine Gallery

Did you know that the display from the Palatine Gallery does not follow a chronological order (differently from the Uffizi), with paintings displayed according to similarity of the subjects, frames, size of the canvas or colors?

Did you know that the collection of works from the Palatine Gallery open its doors to the public for the first time at the end of XVIII century by command from the Grand Duke Leopold who had the objective to acquire popularity after the end of the Medici dynasty?

Why visit the Palatine Gallery?

The construction of the Pitti Palace was the biggest and opulent of the history of the city of Florence, also the presence of the exterior grand piazza makes it a unique thing. When Palacio Pitti became the residence of the Medici gave place to the rebirth of the Oltrarno neighborhood. Its massive facade is covered by a structure called rusticane that makes it very special, this is irregular stones that stand out and that becomes less thick when the high rises.

This magnificent palace houses inside a few galleries and unique collections like the Palatine Gallery, the Royal Apartments, the Modern Art Gallery, the Silver Museum, the Porcelain Museum, the Costume Gallery, the Carriages Museum and the beautiful Boboli Gardens.

How to visit the Palatine Gallery?

The Palatine Gallery is located in the Oltrarno district, just a few steps from Ponte Vecchio. This is a traditional neighborhood very characteristic of Florence where you can admire not only all the museums that are inside the Pitti Palace but also other wonderful attractions such as the Brancacci Chapel in the church of Santa Maria del Carmine with the frescoes of Masaccio, as well as the Church of San Frediano in Cestello and the Church of Santa Felicita.

Very close to the Pitti Palace is Santo Spirito Square with its Church that has the same name. Here you can simply enjoy moments of relaxation in the innumerable bars, cafes and restaurants. If you are on holiday in Florence during the summer a coffee or an outdoor drink are ideal in this place. 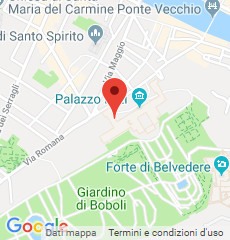