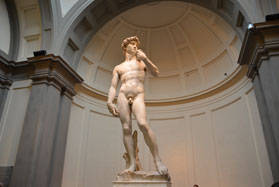 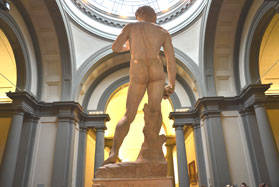 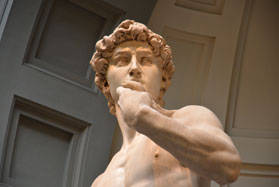 A little history of Michelangelo's David

The story of the statue of David begins with a stone block brought to Florence by boat across the Mediterranean and Arno from the Fantiscritti quarry in Carrara, this block was stored for years waiting to be carved. In the middle of the 15th century, the managers of the Opera del Duomo and the leaders of the union of the Knitters of Florence promoted an ambitious project that consisted of sculpting twelve figures to decorate the exterior of the Cathedral of Santa Maria del Fiore today known as the Duomo of Florence.

This block of marble of 5.50 meters was called "the giant" after that in 1460 Agostino di Duccio and Antonio Rossellino tried to sculpt it without success leaving it impracticable to be part of the project and falling back into oblivion in some warehouse. At the beginning of the 16th century, the project resumed evaluating the names of the artists of the moment as Andrea Sansovino, Leonardo da Vinci and Michelangelo Buonarroti. In 1501, the Opera del Duomo of Florence officially commissioned this project to Michelangelo provoking an interest such that this genius isolated himself to make the sculpture. Michelangelo sculpted the David from September of 1501 until May of 1504, resulting in this icon of the Renaissance with a size and proportions of enormous dimensions. The David is just over 5 meters high and exceeds five tons.

The David is considered the apex of the sculptural work of Michelangelo.

Where is Michelangelo's David?

Did you know that in Florence there are three copies of Michelangelo's David? The original sculpture of the David is in the Accademia Gallery of Florence. The second copy of the David is located in Piazza della Signoria (Duomo Square), just opposite the Palazzo Vecchio (Old Palace). The third copy is in the middle of Piazzale Michelangelo.

Did you know that David possesses the energy that characterizes Michelangelo's work? This wonderful sculpture transmits drama through its eyes with a body full of tension, the mark of its tendons, muscles and veins do not have violent gestures, but they are the elements that we can see in other works of this artist of the Renaissance.

Did you know that the gigantic Carrara marble block that was used by Michelangelo to sculpt the David was ruined? Three different artists tried to work in this block of marble leaving the work after having damaged it. The block of marble was in a state that no other sculptor wanted it, but Michelangelo accepted the challenge to sculpt it.

Michelangelo's David is one of the most representative works of the Italian Renaissance as well as being one of the most famous sculptures in the world. During the Renaissance, great Florentine sculptors such as Donatello, Ghiberti and Verrocchio carried out works by taking up the theme from the Bible where David is represented as a teenager, after having decapitated Goliath. However, Michelangelo decided to represent with this work the moment before the confrontation. So we see a young David ready to hit the giant holding a stone in his right hand with a sling resting on his left shoulder.

The tension of this young shepherd in front of his terrible enemy was represented by Michelangelo with details like an intense expression in his eyes, an accurate contraction of the muscles showing the veins in relief where it would seem that the blood ran. Definitely Michelangelo's David is a masterpiece of the history of Florentine art and one of the most famous works in the history of mankind.

How to visit Michelangelo's David?

With the entrance ticket of the Accademia Gallery you will have the opportunity to see the famous statue of the great Michelangelo in person.

Given the large number of tourists, it is recommended to book in advance the entrance to the museum. If you prefer to deepen your visit with the help of an expert guide, you can book a guided tour of the Accademia Gallery and perhaps combine it with a tour of the Uffizi Gallery and a visit of the city, visiting in this way the main attractions of Florence in a day.

If you are passionate about the great Michelangelo, we suggest a visit with your guide to the House of Michelangelo (Casa Buonarroti) and the Accademia Gallery.

Complete your visit and after admiring this imposing marble statue visit other attractions that preserved in its interior works of this formidable artist.

Among them we have: The Bargello Museum where are conserved sculptures that correspond to the beginning of Michelangelo as sculptor. Here is the Bacco, one of the artist's first sculptures and one of his rare profane works, the Tondo Pitti and the Bust of Bruto (Ritratto di Bruto).

The New Sacristy of the Medici Chapels was designed by Michelangelo himself and built at the beginning of the 16th century. In this sacristy stands out "The Virgin with the Child" (Madonna of Bruges), a sculpture of Michelangelo.

David of Michelangelo or Donatello? 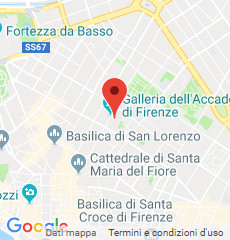