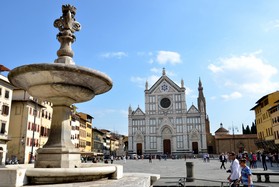 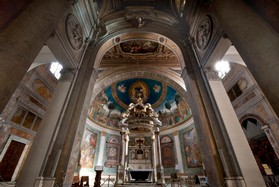 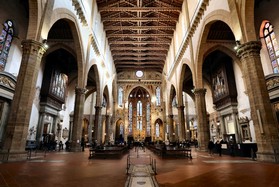 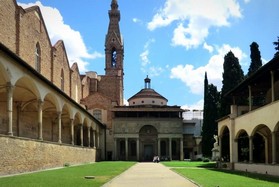 A bit of history about Santa Croce

St. Francis visited Florence at the beginning of the 13th century and a few years later some friars of his congregation decided to stop in the city and build a church with a convent and an adjacent library. Thus was born the beautiful Basilica of Santa Croce.

The one that you can see today is an enlarged version of the original. The extension was a necessity due to the enlargement of the Franciscan religious community. At the end of the 13th century, the renovation of the church was led by Arnolfo di Cambio, one of the most influential architects of the time, the same who also took care of the projects for the Duomo and Palazzo Vecchio. Another intervention was necessary during the 15th century, due to a massive flood, which, however, marked the beginning of a golden period for the religious complex: Santa Croce became, in fact, an important cultural centre, among the most prestigious in Europe. But it was during the 16th century that the church became what it is famous for all over the world, that is, a pantheon that houses the tombs of the most important Florentine and Tuscan figures, not only for their political commitment but also for their genius.

The Basilica faced adversities, such as the collapse of the bell tower, the plundering during the Napoleonic era and, above all, the extensive damage caused by the flood of November 1966, which brought the whole city to its knees. However, thanks to a deep restoration and recovery work, the church returned to its old splendour.

What is Santa Croce today?

Today Santa Croce is a museum complex that brings together the Basilica, the chapels, the monastery, the bell tower and the part dedicated exclusively to exhibitions, such as the former refectory. Thanks to its artistic and cultural vocation, it still bears the signs of the past of the most important figures of late Medieval and Renaissance Florentine history. The entire space is a museum where the pictorial masterpieces by Giotto, Cimabue and Donatello stand out together with the tombs of saints, scientists, high political and literary figures.

In addition to the religious building, you can also walk in the ancient monastery, sometimes used to host public and private events, sometimes with a lot of criticism from the Florentines, who would like to maintain the sacred and cultural character of these spaces. On one of the walls overlooking the monastery, you can see some metal bars with years written on them. They are the memory of the various floods that have hit the city; each bar marks the level at which the water of the Arno river rose during these tragic floods.

Do you know that in the Basilica there is the cenotaph of Dante Alighieri, father of the Italian language and author of the famous Divine Comedy? The cenotaph is a funeral monument which, however, is devoid of the remains of the deceased. Dante's remains rest in a mausoleum in Ravenna, the city that welcomed the poet after he was exiled from Florence. Several times the Municipality of Florence tried to get Dante's remains back, receiving a sharp refusal from the Emilian city. There is nothing left to do, but be satisfied with the cenotaph and the statue that stands outside the Basilica, to the left of the entrance, and look in the city for all traces of Dante's Florentine life.

Did you know that the famous Crucifix by Cimabue is kept inside the complex? This work suffered severe damage during the 1966 flood and was almost destroyed. Only thanks to the patience and talent of many people the Crucifix was able to recover part of its ancient splendour and is today a living testimony not only of Cimabue's art but also of the (sometimes tragic) history of the city.

Visiting Santa Croce you can admire the works of some of the most important painters of the Italian art scene, such as the Stories of the Life of St. Francis by Giotto or the Descent of Christ to Limbo by Bronzino. Moreover, you will be able to observe the various chapels, inside and outside, dedicated to the most important families of Florence, and understand who was in charge there! Finally, you can walk among the funerary monuments of many emblematic figures of Tuscan history; many of these tombs occupy a large part of the floor, transforming the Basilica into a Florentine pantheon.

How can I visit Santa Croce?

To visit this beautiful church, you can buy the entrance ticket to the Basilica di Santa Croce in combination with the Audio Guide of the city of Florence with which you can admire the magnificent City of Art.

Florence is an open-air museum and the whole city is worth a visit. You can go from the must-see Uffizi Gallery to the Accademia Gallery, from the Bargello Museum to the Palatine Gallery and the Palazzo Vecchio, without forgetting the beautiful gardens, such as the Boboli Gardens, which frames the magnificent Pitti Palace.

If you want to explore outside Florence, why not go as far as San Gimignano, with its characteristic skyline of medieval towers, or as far as Pisa and its famous Leaning Tower. 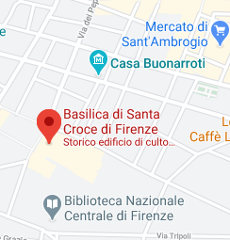