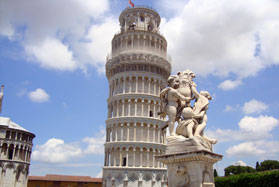 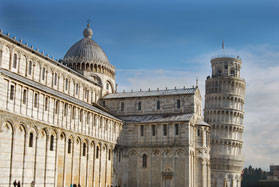 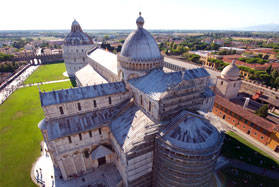 A little of history of the Leaning Tower of Pisa

It took 3 stages and 177 years to build the Tower of Pisa. The architect Bonanno Pisano began its construction in 1173 with the first floor which was surrounded by 15 columns in white marble with classic capitals and blind arches. With the construction of the third floor in 1178, the tower bent 5 cm. to the southeast, due to the unstable subsoil on which the tower was built, thus ceasing its construction. This period was very important and allowed the settlement of the ground, otherwise the tower would have collapsed.

Giovanni di Simone, 100 years later, resumed work trying to compensate for the inclination of the tower by vertically building four floors, however the results were not as expected, the bell tower was still leaning and the works stopped again. In 1298 a plummet deviation of 1.43 m was measured and 60 years later this figure had increased to 1.63 m. Tommaso Pisano continued the construction of the bell tower whose works concluded in 1372. According to Vasari, Nicola Pisano and his son Giovanni deserve credit for this work.

The inclination of the tower slowed down during the following centuries, it is believed that its weight was an important factor allowing a certain stabilization of the building. The architect Alessandro Gherardesca made the first restoration in 1835 eliminating the muddy soil and replacing it with a marble base. The result was tremendous, this provoked a new tilt and in 1918 the Plumbing deviation reached 5.1 m. Until 1990, the tilt of the tower continued to increase from 1 to 1.2 mm. annually.

What is the Leaning Tower of Pisa nowadays?

The Tower of Pisa in Italian Torre Pendente di Pisa is located in the city of Pisa, exactly in the Piazza del Duomo of Pisa known as Piazza dei Miracoli (Cathedral Square). This famous tower began to tilt when its construction began in 1173. The Tower of Pisa measures 55.86 meters of height with an estimated weight of 14,700 tons and an inclination of about 4 ° extending 3.9 m of the vertical. In 1964 the Italian government asked for help to prevent the Tower of Pisa from collapsing.

In 1987, UNESCO declared Patrimony of the Humanity to the whole patrimonial group of the Cathedral Square. In 1990 it closed its doors to the public as a security measure and after several works of restructuring, on June 16th 2001 opened its doors again.

Curiosities of the Leaning Tower of Pisa

Did you know that there is a legend that tells that Galileo Galilei dropped two cannonballs of different mass from the Tower of Pisa? His intention was to show that the speed of the fall was independent of mass.

Why visit the Leaning Tower of Pisa?

The Tower of Pisa is a true jewel of Romanesque art. In addition it is a monument that has acquired importance through the centuries by its pronounced inclination creating admiration and concern to both experts and tourists. The Tower of Pisa was proposed as one of the 7 Wonders of the Modern World!

This tower is the bell tower of the Cathedral of St. Mary of the Assumption in the Cathedral Square and has 55.86 meters in height, 8 floors and about 294 steps. The 8 floors are surrounded by a loggia with arches that reproduce the motif of the facade of the Cathedral and has 7 bells on the top floor of the Tower, their names are: Assunta the largest and heaviest, Crucifix (Crocifisso), San Ranieri , Dal Pozzo, Pasquareccia, Terza, Vespruccio. At the moment they continue to sound before the beginning of the masses of the Cathedral and at noon thanks to an electronic system.

How to visit the Leaning Tower of Pisa?

To visit this inimitable attraction, its recommended to book a guided tour of Pisa and the Leaning tower to discover and deepen your knowledge of the history of these wonderful places thanks to the explanations of an expert guide.

Pisa known mainly for its Leaning Tower, but this city offers many other attractions like its beautiful "Piazza dei Miracoli" (in English Miracles Square) or Cathedral Square. Here we can see the cathedral and the baptistery besides the Leaning Tower. Along the perimeter of the square are also the Cemetery, the Opera Museum and the Sinopie Museum. Enjoy a walk along the Arno River until you reach the ancient Palazzo dell'Orologio (Clock Palace) and Piazza dei Cavalieri (Knight Square) where the prestigious "Scuola Normale di Pisa" is located. 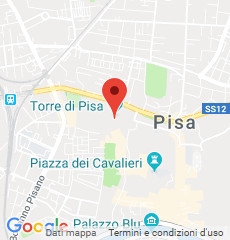