A bit of history about the Bargello Museum

This imposing building was a fortress in the center of Florence which construction began in 1255 with the aim of being the headquarters of the People's Captain and later of the Podestá. From the XVI century and for almost three centuries this building was used as a prison and its name is due to the police chief of the moment.

During the fourteenth and fifteenth centuries, this building underwent numerous changes and additions that altered its original structure but have not altered its imposing and austere appearance. Despite all the extensions, the beautiful patio, the balcony and the large first floor room are still evident.

What is the Bargello Museum nowadays?

This ancient medieval palace now houses the Bargello Museum, born as a residence for the People's Captain, then for the Mayor of Florence and finally for the Captain of Justice. During the fourteenth century it became a prison and, after a complete renovation, in 1865 the Bargello Museum was officially born.

The National Museum of Bargello is home to the largest collection of sculpture of the Tuscan Renaissance in the world, including works by Donatello, Della Robbia, Verrocchio, Michelangelo, Benvenuto Cellini, Jacopo Sansovino, Giambologna, Lorenzo Ghiberti and Filippo Brunelleschi, along with a significant selection of medieval French ivories, Italian majolica and arms.

It houses some of Michelangelo's earliest sculptures, such as the "Bacco" (1496) of the aged appearance, "Tondo Pinti" (1504), "Bruto" or "David-Apollo", as well as valuable works by Donatello, Ghiberti, Verrochio and Giambologna. Finally we find the Carrand collection, made up of precious Roman, Byzantine and medieval pieces in ivory, baroque and baroque jewels, enamels of French origin and scientific instruments. Also of great interest are the ceramic and weapons rooms located on the second floor.

Curiosities about the Bargello Museum

Did you know that the museum was severely affected by the flood that Florence suffered in 1966? especially the ground-level floor where the arsenal and Renaissance sculptures had been placed. Later, all the works were restored to perfection thanks to the important international collaborations.

Why visit the Bargello Museum?

The Bargello Museum preserves a selection of extraordinary sculptures and minor arts. The history of the Bargello building is considered to be the oldest of Florence's public buildings. A wonderful museum where only its architecture is worth to be seen without forgetting of course the works of Michelangelo, Donatello and Giambologna that make this place one of the most suggestive of Florence.

How to visit the Bargello Museum?

If you wish to organize your visit to the museum in advance, it is possible to buy the tickets to the Bargello Museum online.

Due to the great artistic and cultural heritage that Florence offers, you will find it difficult to cover everything. When planning your visit take into account the following tips: The cathedral, the Duomo of Santa Maria del Fiore is a monumental complex with several attractions of great beauty. From the dome built by Brunelleschi in the 15th century you can enjoy excellent panoramic views of Florence.

Just in front of the Cathedral is the Baptistery of San Giovanni with a replica of the Doors of Paradise built in bronze in the fifteenth century by Ghiberti, the originals are the Duomo Opera Museum, just behind the Church of Santa Maria del Fiore.

Closed on the 2nd and 4th Sunday and 1st, 3rd and 5th Monday of each month; New Year's Day, May 1st and Christmas Day. 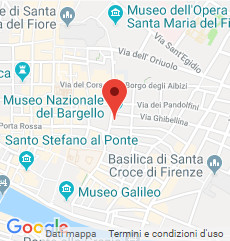