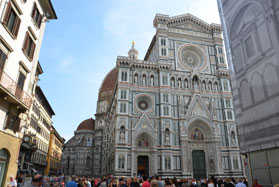 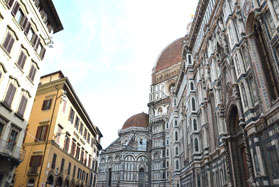 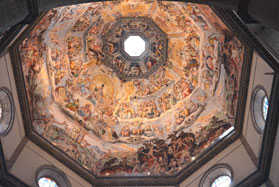 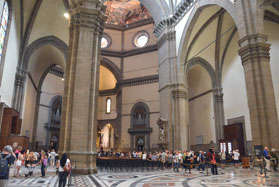 A bit of history of the Duomo Florence Cathedral

The Florence Duomo, also known as Santa Maria del Fiore Cathedral, is located in Duomo Square, its construction began at the end of the 13th century under the design of Arnolfo di Cambio, a famous architect and sculptor who loved the Gothic style.

The cathedral has a main nave and two side aisles plus a rear apse. When di Cambio passed away, the construction of the cathedral was postponed and was resumed in 1334 by Giotto who designed the bell tower. However, the construction was interrupted again in 1337 with his death. The construction of this magnificent project continued with Andrea Pisano and Francesco Talenti finalizing its construction in 1359. The Giottos Campanile is 85 m high and it is possible to climb to the top through its 414 steps from where it is possible to appreciate a wonderful view of Florence.

In the mid of the 14th century, Florentine artists put aside the Gothic style and incorporated the Roman style. The Gothic air of the cathedral was hidden behind the red marble of Siena, the white of Carrara and the green of Prato. The metalsmith Lorenzo Ghiberti and the sculptor Filippo Brunelleschi had the privilege of finishing the Cathedral of Florence

Brunelleschi sculpted the statues for the dome and designed an innovative project to make the Florentine Cathedral the largest of its time. Brunelleschi started with the construction of the project by 1421, the polygonal base had already been completed while the dome was completed 15 years later. The red dome of the cathedral was then the largest in the world, 45 m in diameter and 100 m high and soon became the symbol of Florence.

The facade of the Cathedral was destroyed at the end of the 16th century and Emilio de Fabris redesigned it, made some modifications and incorporated marble in different colors.

What is the Duomo Florence Cathedral today?

The Duomo of Florence, Santa Maria del Fiore Cathedral or Florence Cathedral (in Italian: Duomo di Firenze) is the episcopal seat of the archdiocese of the city of Florence. It is one of the greatest masterpieces of Gothic art and the first Italian Renaissance.

This Florentine cathedral is one of the largest churches in Christianity with its 160 m in length, 43 m wide and 90 m in the transverse nave. The interior height of the dome is 100 m. It is also a symbol of the wealth and power of the Tuscan capital during the 13th and 14th centuries. Its name derives from the lily, the symbol of Florence and the ancient name of the town called Fiorenza.

Today, the Florence Cathedral can be surpassed in size only by the Basilica of St. Peter in Vatican City, St. Paul's Cathedral in London, the Cathedral of Seville and the Cathedral of Milan. However in its time, this cathedral was the largest in Europe, with a capacity for 30,000 people.

Curiosities of the Florence Duomo

Did you know that the San Marcos Museum houses a Dominican cloister? The cloister is located on the first floor where the Annunciation fresco welcomes visitors.

Filippo Brunelleschi died on April 5, 1446. For his funeral he was dressed in white and placed in a casket surrounded by candles, with his eyes towards the dome which he had built brick by brick. He was buried in the crypt of the cathedral with a commemorative plaque that honors him. A great honor, since at that time, the architects were considered humble artisans and were not buried in the crypt.

Did you know that the old cathedral of Florence was called Santa Reparata and the authorities of the time decided to build a new temple over it? Over the years the church of Santa Reparata became small for the inhabitants of the city, on it one of the largest churches in the world was built. A true gem of Gothic with its brick dome, a work of the brilliant Brunelleschi.

Why visit the Duomo Florence Cathedral?

The complex of the Cathedral of Florence is located in Duomo Square and includes the huge dome of Brunelleschi and the soaring Campanile of Giotto that next to the Battistero determine the silhouette of the city. The construction of the Cathedral of Florence began in 1296, more than two centuries after the Cathedrals of Pisa and Lucca. The construction of this majestic building lasted 72 years and finished in 1368 under the design of the architect Arnolfo di Cambio who fail to see his work finished.

How to visit the Duomo of Florence Cathedral?

If you want to be accompanied, then you can choose from four different guided tours: Giotto's Bell Tower + Piazza Duomo, Flash Tour of the Cathedral of Santa Maria del Fiore, "Inferno - in the footsteps of Dan Brown" Tour, Duomo Complex + Brunelleschi's Dome. Lastly, you can take advantage of two private tours, namely, the Private Tour of Florence in one day and "Inferno of Dan Brown - walking tour with private guide".

The historic center of Florence is relatively small and can be easily be cover by foot. In the surroundings of the Basilica of Santa Maria del Fiore there are several attractions that can be visited and which are testimony of the cultural and artistic life of the city.

Among these attractions we have the Signoria Square (Piazza della Signoria) which is the center of the civil power of the city, here is the Old Palace (Palazzo Vecchio). Looking at this majestic palace we have on the right the Uffizi Gallery, with paintings such as The Birth of Venus by Botticelli and the Adoration of the Magi by Leonardo da Vinci, this art gallery is the most visited place in Florence. From here, two steps away is the Old Bridge (Ponte Vecchio) with its houses and hanging shops, one of the most famous bridges in the world. The "Old Bridge" is also the oldest stone bridge in Europe. 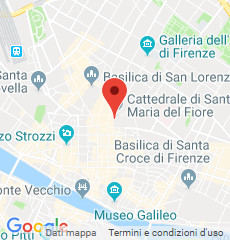